The Subject is GRAY

I woke up this morning and decided to do a bit of research on my current fascination with gray scale. Yesterday's heady dose of sunshine had been replaced today by the familiar gray; it's been windy and cold so all the way around a perfect day to warm myself by the glowing light of the computer monitor. I had some phone calls to make so I decided to do some early morning Internet searches to see if I could find other artists who are attracted to grayscale in their work. I know that most artists love color and I'm no exception but I have been enjoying working in grayscale so much that I wondered if there are others of a similar bent.

When I mentioned my research to a friend I was talking with on the phone later this morning, she suggested that I look into the new exhibition, "Jasper Johns: Gray" that just opened at the Metropolitan Museum of Art (http://www.metmuseum.org/) The exhibition of 120 of Johns paintings, drawings and prints originated at the Art Institute of Chicago this past fall.

Could I help but be intrigued? I'm familiar with Johns paintings of flags, maps, targets and numbers. He is generally credited with laying the groundwork for the movement from abstract expression into Pop Art and Minimalism. But I couldn't really remember any works that were done in gray. 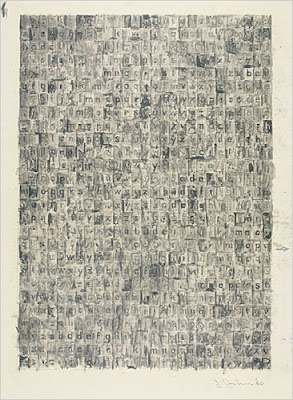 Among the pieces displayed at the Metropolitan Museum's web site, this one, titled Gray Alphabets (1960), definitely touched a chord. 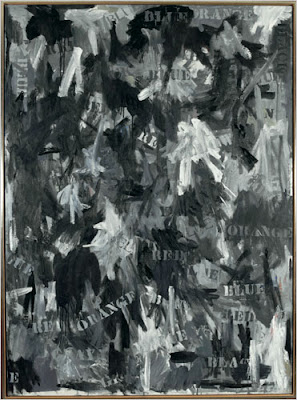 So did this piece "Jubilee" 1959,with stencilled words being revealed and sometimes concealed on the surface. Johns did a similar piece the same year in saturated color called "False Start", but I found myself becoming more aware of each shape and detail in the gray piece, primarily because removing color allows the viewer to see things that the presence of color makes it more difficult to view. On the color scale, gray stimulates the vision the least -- and makes it easier for the viewer (and possibly the artist) to focus on ideas. According to reviewer Jerry Saltz in a March 05, 08 video on New York Entertainment ( http://nymag.com/), Johns has used the color gray since the mid-1950's as a statement of "scepticism, quietude or anticipation." Among the subjects that Johns has returned to painting again and again, are familiar, literal objects, ones that he describes as "things the mind already knows." Interviewers quote Johns as saying he has wanted to focus on "things that were seen and not looked at, not examined." Throughout his nearly 60 year art career, Johns has included factual marks and shapes in most of his works, including hand prints and footprints, casts of parts of the body, or stamps made from objects found in his studio, such as the rim of a tin can. His techniques stress conscious control rather than spontaneity.
It's interesting to me to consider Johns way of portraying literal objects in his paintings. Saltz points to Johns works as making us ask ourselves "what is a painting." In one painting in the "Gray" exhibition, Johns paints the act of biting into the painting. Another work on exhibit was created by the artist inking his face and rolling it across the surface of the canvas so the artist is literally "inside" the painting, trapped inside his own work.
It intrigues me to contemplate art through very different eyes and sensibilities and to consider the body of work this artist has created over a long, successful career. Johns, born in 1930, spends summers in Connecticut and winters in St. Marten, but he still continues to work and evolve as an artist. Quite an accomplishment.
Posted by Jeanne Raffer Beck at 11:29 AM