Is there a single one of us who hasn't made a piece that just never worked out well? What do you do with yours? While I read often of painters burning failed works, I'm more frugal -- also more optimistic about recycling my materials. 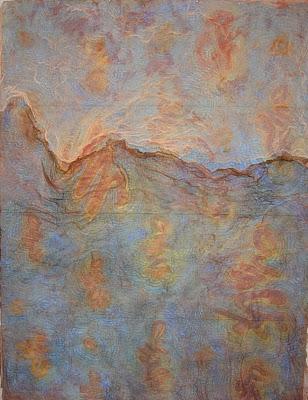 An old, failed project revisited the design wall this week. The original idea, attempted last October and November was to build a surface where letter forms appear to be falling down like rain. One of the other reasons it failed, I decided, was that I just didn't like the letter shapes themselves. I twisted and turned and painted and overworked the surface to death. I completed it and then realized that I basically could never show it in public.

But this week it occurred to me that I could re-vision this "finished" piece strictly as an under-painting, pushing back the original composition to a mere suggestion by layering painted, manipulated cheesecloth over it. 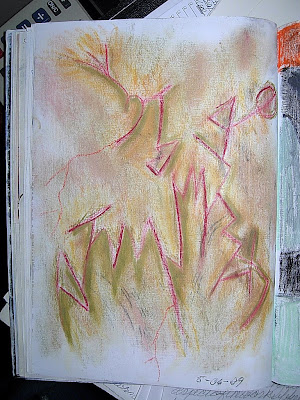 I planned to develop cracks and fissures with elongated Etruscan letters applied along with hand stitching onto the cheesecloth layer -- again referencing age and accumulated layers over time.

But then I went to the hairdressers and saw a picture in a decorating magazine of a painting with an abstracted bowl shape in it. I have been drawing bowl shapes and musing on how to integrate them into my language pieces for two years. When I came home, I drew some variations inspired by the shape I saw and decided to consider the idea of adding abstracted bowl shapes to the surface rather than more letter shapes. 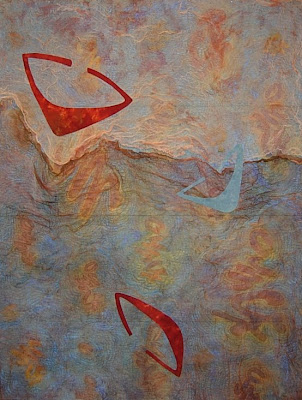 Here's the first effort. I question whether the bowl shapes really integrate with the language forms still faintly visible through the manipulated cheesecloth.

My dear friend and fellow artist Rebecca Howdeshell saw this and suggested the shapes might integrate better if I age their surfaces, which is an excellent idea to try next. What if they have cracks and fissures and maybe even fragments of letters on them?!

So that will be tomorrow's studio agenda, creating ancient, cracked fabrics to cut into bowl shapes and try in place of the ones shown above. If either of the new ideas work, then I will add hand-stitched cracks as line work for definition and emphasis and reclaim this. If they don't, the piece goes deeper back into the storage closet or off to the local Goodwill thrift shop!
Posted by Jeanne Raffer Beck at 3:57 AM