I'm becoming increasingly appreciative of exhibits that reveal the evolution of a body of work and document the artist's process. This is the case with the display of Fletcher Benton's sculptural pieces, "The Alphabet," an engaging exhibition currently at the Albright Knox Art Gallery in Buffalo, NY. The artist, born in 1931 in Jackson, Ohio, has spent most of his adult life living and working in California. He is best known for his kinetic sculptures.

With no particular expectations that I'd particularly thrill to either exhibit, I drove to Buffalo on Thursday to meet an old friend at the Gallery's on-site restaurant "muse", where we enjoyed lunch and conversation on the patio. Then we visited Benton's "The Alphabet" and"Wall Rockets" that features a large selection of works, some by Ed Ruscha himself, but mostly by a next generation of artists who have been influenced by his ideas and body of work.

Interestingly, I felt more connected with the display of Benton's work than with "Wall Rockets." The intimate size of the space made a wonderful container for the small sculptures. Evidently Benton became quite fascinated with the Roman alphabet as a young boy and taught himself to paint the letters. He became so skilled at painting letters that he was earning money as a sign painter by the age of 13. 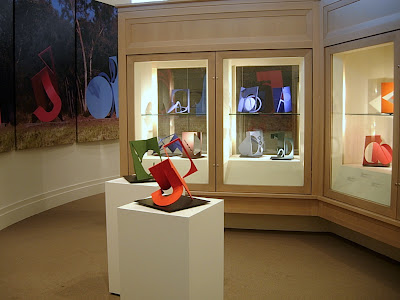 The lit cases hold shelves of small painted steel structures created from the twenty-six letters in the Roman alphabet as well numerals 0-9. 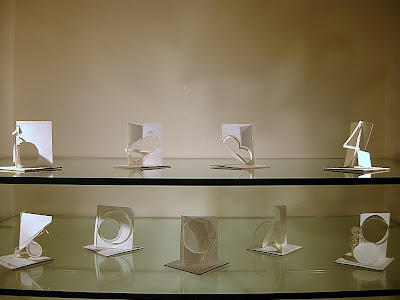 These displays of tiny white maquettes captured my imagination immediately, first because the pencil lines of the artist's sketching were apparent and I could see the slight corrections he made before cutting them and second, because they reveal a sense of creative play that seems to characterize much of Benton's sculptural works.

Benton began working on these sculptural forms based on the Roman alphabet in the 1970's and completed the last of them just a few years ago. Some of them have been translated into large scale sculptural installations. While there are images of large-scale, installed sculptures on the walls, viewing the smaller scale ones together in close relationship to one another engaged my imagination more.

If you do go to the link above and visit Fletcher Benton's website, there are links to part 1 and part 2 of a video that provide a brief overview of Benton's career and artistic evolution. It's well worth viewing. Benton's growth and development as an artiist can offer inspiration and insight for developing artists. I felt an immediate kinship and appreciation.
Posted by Jeanne Raffer Beck at 4:54 AM