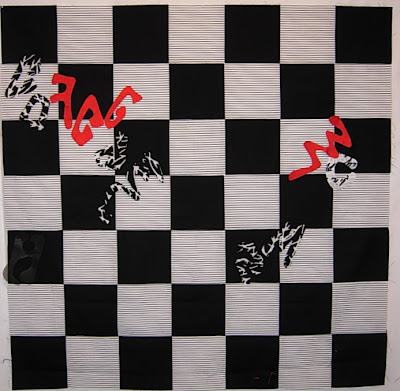 When I get a design idea, it seems to form almost piecemeal in my imagination. I try to do some rough sketching and a few samples to flesh out into some basic structure of an idea, but the only way I can really work through an idea is just to work with it, starting with a seed and letting that evolve and grow.

After finishing Parables 2, I decided to try creating a grid, playing with it a bit by adding on some small squares (possibly of varying sizes and hues and values) within the larger squares and then breaking through the grid with the dancing letter forms in both advancing and receding colors. Believe it or not, I, the whole cloth layering fanatic, actually cut out 5 1/2" squares and SEWED them together to start this piece!! (In my defense, my philosophy has always been to choose the technique to match the concept, and in this case, piecing seemed the way to go.)I now have a 35 1/2" square checkerboard of white squares with thin stripes (yes I am also actually using commercial fabrics, which I haven't used in years but I have a little selection left of black and white prints that I like a lot) offset by plain black ones. I tend to prefer grids that are looser than this one, but I do think as I apply the elements on this surface, the grid will begin to vibrate more.

Now that the ground is pieced and ready, I am currently pinning letter form patterns, same ones I used on Parables 2, onto a variety of fused fabric surfaces and cutting them out. My goal, eventually, will be to have a nice pile with a variety of hues and values, so some of the letter forms will pop when you look at them (like this wonderful red dupioni silk) and some will recede into the ground (a variety of greyscale prints). In the photo above, I am playing with the first cut pieces on the surface because seeing them on the ground will help me determine what other fabrics to fuse and cut to add to these. I know I'll cut a lot more fabrics than I'll actually use, but need to have them ready when I get to the composing stage. Here they are just stuck on wherever and I've moved them around a few times to see how they interact with each other.

I am tempted to tea dye this piece, but am holding myself back at the moment. There is a crispness to these contrasts that I will lose if I do, although the tea dyeing will give me that aged, weathered look that I love.
What I've learned after all these years is to respect these pushes and pulls inside but to let the conversation continue for a bit before I leap into action. At the beginning stages of playing with an idea, it's better to move a bit more slowly than to sit in a glum heap of regret for blindly acting on an impulse. I may not like this idea further down the road at all, the work on this may just end up getting pitched for a totally different composition, but engaging in the deliberation and decision making is the hook that keeps me so passionate about being a maker. I love beginnings, there is always an edge of excitement about not quite knowing where a new adventure will take me but knowing that I'm up at bat and ready to swing.
Posted by Jeanne Raffer Beck at 5:36 AM