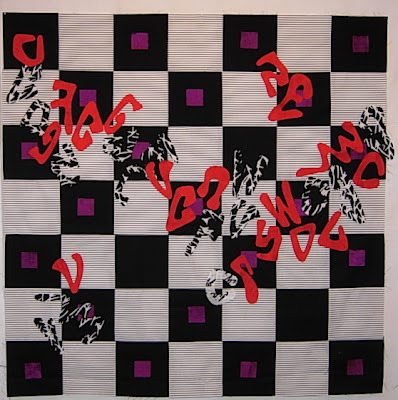 By about 8 PM last night I had tried numerous variations of hues and combinations on this new piece, which as yet remains unnamed. Obviously, I had created a very strong grid as a ground with the black and white squares. I decided that while the red letter forms would break through the grid lines, it might also be interesting to include squares within squares as another layer of pattern. The first thing I did was to cut out 1-1/2" squares of silk dupioni in turquoise, violet, gold and orange with fusibles adhered to them and played with placement within the larger light and/or dark squares. The violet was the least intrusive. I also tried breaking up the groups of the red letters with letter forms in a black and white commercial print. This image is probably the fourth variation, by which time I decided that I didn't like the small dots of color on each square and started to take them off.

Late in the afternoon, I cut large and small squares of my own silk screened fabrics and placed them on the checkerboard ground. I like the way cutting the script into small pieces puts the focus that much more on the gestural marks and swoops of the handwriting. While I was absorbed in this, the phone rang and arts writer Stuart Low from Rochester's daily newspaper, the Democrat and Chronicle asked if I could talk to him about my language piece that is part of the MAGnificent Inspirations exhibition.
What amazes me about talking to someone about textile art who isn't familiar with the medium is how much most of them want to understand it better. Stuart didn't approach our conversation with a preconceived agenda or biases, he seemed to really be listening, trying to elicit my ideas rather than imposing his. His interest and good questions made for a very worthwhile conversation. Probably only one or two lines of our dialogue will make it into the final article, but I hope his interest in textiles as art will continue to grow because of the Wild by Design, Michael James and MAGnificent Art Quilts exhibitions.

After that pleasant interruption, I returned to my work. I decided to remove the busy commercial print letter forms. I cut and placed larger squares in the dark blocks and smaller ones in the light ones. I may play with altering the sizes of these more randomly. I may tea dye all the black and white fabrics to give the appearance of age. But even with these small changes I get the sense that I'm coming home again to what I'm trying to say, that using my own fabrics is putting my voice back into the work. Another concept to deliberate as I create these pieces. So while the forms are becoming simpler in this piece, the connections and ideas behind the choices are deepening. 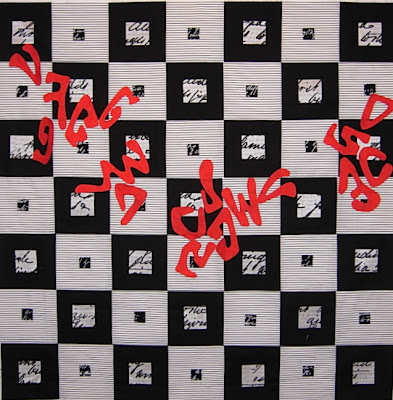 By 7:30 PM, my feet were aching from standing in new shoes all day so I worked for another half an hour and suddenly remembered George Burns saying, "Say goodnight Gracie!" at the end of each television show-- and knew it was time to call it a day before I made punchy choices that would just have to get undone. Definitely time for pjs and the couch!
Today I'm going to have another interesting experience, thanks again to the Memorial Art Gallery quilt exhibition. I'm taking three groups of area teachers through the MAGnificent Inspirations exhibit of small art quilts this afternoon to talk about "seeing and responding". We'll consider what these quilt artists may have seen and responded to when they looked at other artist's works. I have no idea how it will go but I can't imagine it could be anything but interesting to hear educator's thoughts and questions about the pieces. In the meantime, off to work on this piece.
Posted by Jeanne Raffer Beck at 4:45 AM