It's Been A Hard Day's Night

It's been one of those months where I've worked and worked and nothing seems to do anything but create more work. Perhaps it's because I had such a specific vision in my head when I started working on this piece. I wanted to create a feeling of these letterforms scrolling down, almost as though falling through space. 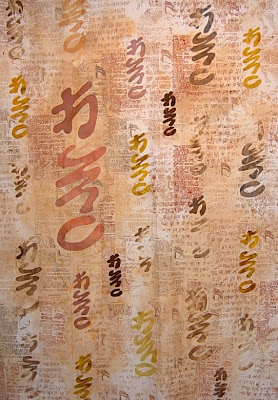 I got this far with the scrolling letterforms idea and threw up my hands. Originally I had my eye on completing THREE pieces, but by the time I had worked and reworked this over and over and got more and more frustrated with it, I decided to sacrifice it to that temptress, Experimentation. It's not that this piece has anything horribly wrong with it, it's just basically static and unexciting. None of these letterforms were fused to the surface, so I thought perhaps if I created a new ground for it that had more color and contrast, I'd start to love it. 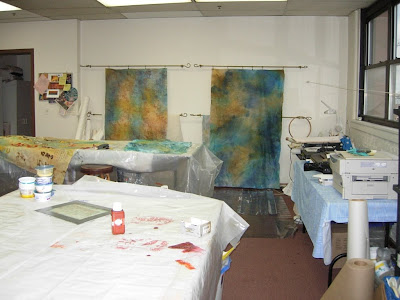 First I painted the other fabric I had rusted and silkscreened and let it dry. That's hanging on the left. When I started putting the letterforms on it, detail below, I didn't like the way the colors interacted. Too much yellow and green. 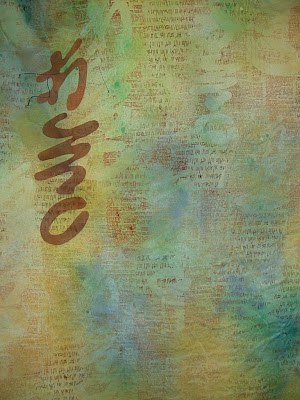 So I tried again. I painted two lengths of silk, which turned out pretty but very light, see the detail below -- this particular piece I liked so much that I left it as is and will reserve it for another project. 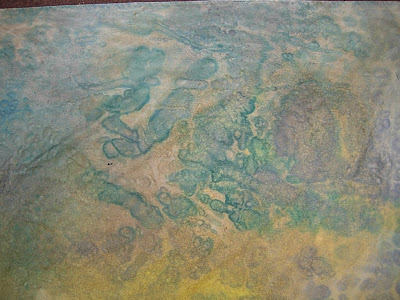 I overpainted another piece of silk (shown hanging above in my studio on the right) to bring in deeper rusts and rich blues. This will need to be edited down to a smaller size, but I like it. So then I took the Big Plunge, removed the letterforms from my original ground and overpainted it. 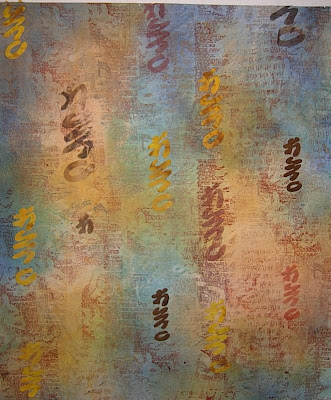 Although the blue is a little bit dark, the colors enhance the letterforms better than the lighter versions and I must confess that after numerous hours of just cutting out letters in different scales and colors, I have no desire to cut more of these shapes.
That's when it dawned on me. It isn't just the COLORS that are bothering me, it's the LETTERFORMS. They feel mechanical, uniform, regimented. I want them to be like the ground fabric, more spontaneous and organic and full of movement. So this is where I am at the moment. Three to four weeks of intense, continuous work later and I discover that I am back at the beginning.
When I went to my studio today, I knew I had to break away from the emotional intensity of working so hard with so little to show for the effort. This, by the way, is not the only endeavor that has been on rocky ground; I've been trying to print new cloth for another seed piece and that has not worked out yet either. So I sat quietly in my studio today and asked myself what I would rather be doing than cutting out letterforms or working to resolve any of my current works in progress. The answer was, "Play!"
So I ripped a 18"x 18" or so piece of cloth and started mixing paints. I paired a warm golden tone with cool greys to create an interesting ground and then I practiced my gestural calligraphy with the black, painted marks. Finally, I echoed the drawn black lines with white ones and voila! - I feel pleased and moving in a direction that excites me again. It's subtle but has a lot of energy and vitality. I can't wait to do more. 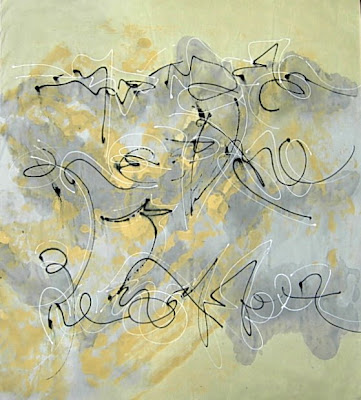