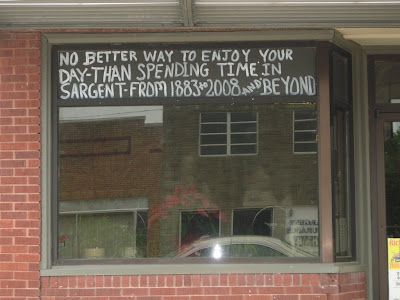 The hand lettering and sentiment on this sign caught my attention. The population of Sargent, Nebraska may be under 600, but the people who live there are proud of their rural community. 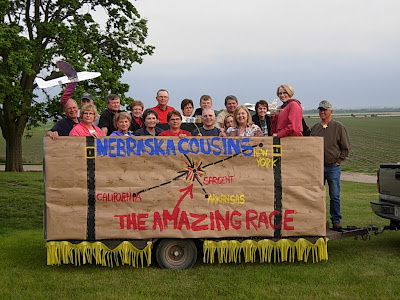 Our visit coincided with Sargent's Chokecherry Jamboree. We woke up on Tuesday and decided to make a float for that evening's parade. The theme was "reality shows", so we produced this "suitcase" with airplanes flying in from east and west in about seven hours (OK so it looks it, but there are no stores in Sargent to buy fancy supplies!). We won first place, a ribbon and $25 in our category! Here are most of Bob's cousins and spouses posing in it the next night at a family picnic. 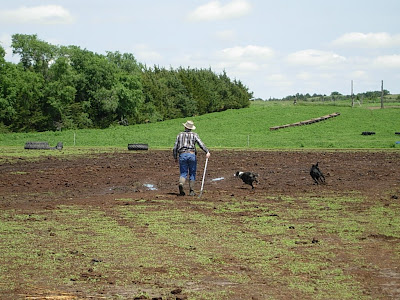 The day after the parade we drove out to Greg and Jodie Smith's cattle ranch to see his Hangin Tree Cow Dogs in action. They love to run and herd and save Greg a huge amount of time. We had spent Sunday on Greg's farm with neighbors and family and friends watching them brand and geld about 180 calves. Confession, I did not really get close up to watch once I smelled the burning leather. The weather was cold and drizzly and we stayed in a van a bit away from the center of the action.
I now know more about how beef is raised in this country and particularly how important it is to these families livelihoods in Nebraska.

Ranch work seems to me, as an outsider, to be never ending. Because red cedar trees grow so rapidly and prolifically in the Nebraska sand hills and kill off grazing grass, many ranchers clear them out by burning them. The cedars in the canyon in the above picture have been burned so the canyon will eventually be cleared for cattle to graze. 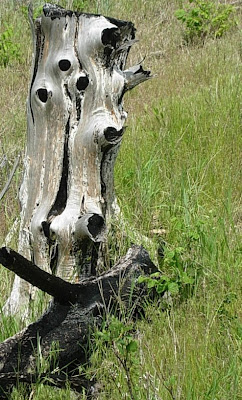 The cedar's charred stumps can also inspire an artistic response. I took several photos of them. As we walked Greg's land in the Nebraska sand hills, where he has lived since the day he was born over half a century ago, I asked whether he looks around him and just sees all the work needing to be done or still appreciates the beauty. And I could tell by his reply and the look in his eyes that he loves his land and would not choose to be anywhere else on earth but right where he is living exactly the life that he does. How many of us can say the same?
Posted by Jeanne Raffer Beck at 8:59 PM