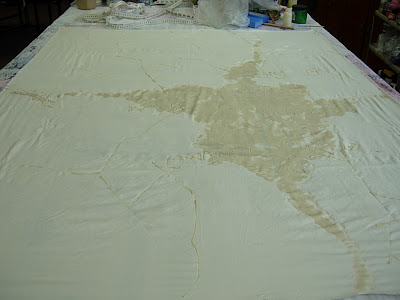 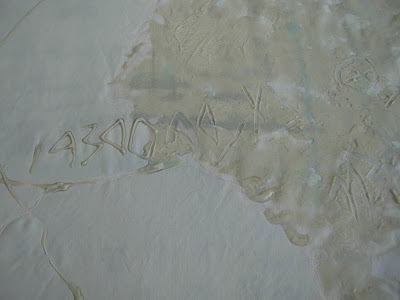 After a full week away, returning to the studio today was quiet but purposeful. I stretched a new piece of cloth on the print table and mixed some flour resist paste. I'm revisiting the idea for one of the last pieces I made (using ripped paper resists) that lost so much color once processed; I really liked the shape and wanted to give creating it another try. This time instead of using paper for a resist I brushed on the flour paste resist and carved some Etruscan letter forms into it, then filled a needle-tipped applicator bottle with more resist and drew some letters and cracks on the rest of the piece. A beginning. It needs to dry completely before I layer over it.

Another one of the three pieces became a testing ground for letterform ideas. I cropped the whole piece to a tall vertical, about 22" x 48", and decided to see what gold lettering would do to the surface. It has possibilities. The letterforms along the tops of some of the shapes almost appear to be marching. I wish I had stopped sooner, but it is a practice piece.

I am enjoying applying the letters by hand rather than screen printing them on the surface. It seems more direct and gestural to do it this way.

Either tomorrow or Thursday I'll return and print the first dye layer and start building a textural surface over the dried flour paste resist.

I'm moving back and forth between working on my lecture for SOFA and this type of studio experimentation. It's an interesting process to study other artists who have explored the visual potential of written language and then consider more deeply what I am trying to express in my own work. I have no idea where the research and experimentation will lead, which gives the whole process just enough of that hint of mystery to make the search all the more intriguing.
Posted by Jeanne Raffer Beck at 6:10 PM