The recent trip to Toronto introduced me to two Canadian artists whose work I had not seen nor read about before, Betty Goodwin and Kai Chan. Here’s an introduction to Goodwin. 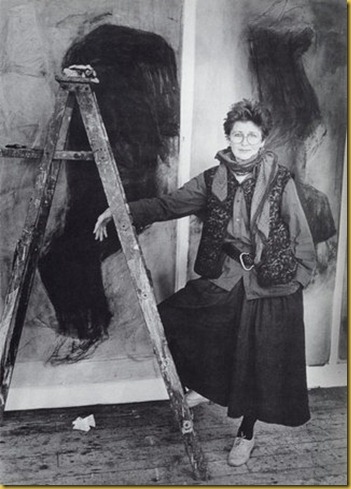 Betty Goodwin, born in Montreal, 1923 – 2008. She passed away three weeks after the death of her husband Martin, to whom she had been married for over 60 years.

Betty Goodwin’s work appeared at AGO in the “At Work” exhibit along with Eva Hesse and Agnes Martin. Goodwin, who passed away in 2008, had an extensive collection of sketchbooks and notebooks, which have been donated to the museum along with 200 of the artist’s works. Approximately 100 sketchbooks, carefully opened and placed under glass, were on view during the exhibition.

These were the focal point of her exhibition. Only four of her actual pieces graced the walls of the gallery. It seems that Betty carried her sketchbooks with her constantly, jotting down ideas and insights over the entire span of her 50+ year career as a working artist.

While I looked forward to savoring Agnes’ works and Eva’s test pieces more closely, the introduction to Betty’s work and ideas was an unexpected surprise. I had never heard of her before.

Born and raised in Montreal, Goodwin’s body of work included printmaking, paintings and drawings, sculpture, installation and mixed media works. She was primarily a self-taught artist.

An accompanying video interview with the artist was part of the exhibition and provided a wonderful background on both her life and the inspirations for her subject matter.

Many of Goodwin’s most famous works involved depictions of cloth and textiles – including her celebrated Vest and Tarpaulin series – that although discarded objects, still feel hauntingly human. During this time she printed vests, gloves, shirts, gloves and parcels.

A later series, Swimmers, focuses on drawn and painted figures that appear to be lifelessly adrift or drowning. In the video interview, Goodwin explained that her husband nearly drowned along the Greek coast during a vacation there. Even though he was saved by a passerby who heard her screaming for help on shore, the traumatic experience drew her to paint a compelling series. 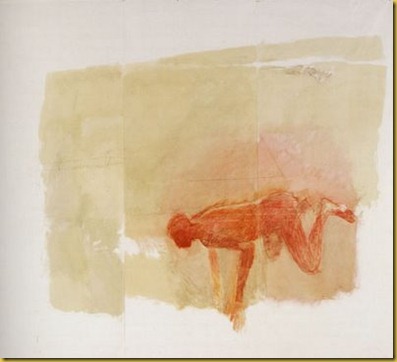 One of Goodwin’s large scale “Swimmers”, worked on numerous pieces of overlapped and attached  pieces of paper.

Posted by Jeanne Raffer Beck at 4:44 AM