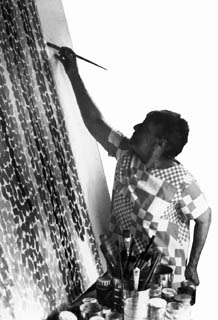 Meet Alma Woodsey Thomas, 1891-1978, an African-American artist and activist. Why does Alma capture my imagination and respect and make me want to write about her life?

Aside from being an artist who fell in love with reductive abstraction, Alma's commitment to her growth as an artist extended over the course of her lifetime. When I read that she had her first solo exhibition when she was 68 years old, it made me realize that there really aren't any time limits on creative pursuits or accomplishments.

Alma was born and raised in Columbus, Georgia. She developed a lifelong love of nature from spending summers on her grandfather's farm in Alabama. In 1907, at the age of 16, she moved with her family to Washington, D.C., into the house where she spent the remaining seven decades of her life.

Alma graduated from high school and then attended college, earning a teaching certificate and later her master's degree in art education. She was the first graduate of Howard University's art department. She supported herself by teaching art at Shaw Junior High School; she taught there from 1924 until her retirement in 1960.

Throughout her teaching years she studied art during the summers in New York City. She became an authority on the crafting of marionettes, kept up with the latest developments in contemporary art and in 1943, helped found the first modern art gallery in Washington. It was also the first gallery to exhibit the works of white and African-American artists together.

Alma continued to take art classes part-time during her teaching career. She studied at American University from 1950 to 1960. While she worked primarily in realism in the early part of her life, during her graduate studies at Howard she became fascinated by abstraction, even though her collectors and educated fellow DC-based African-Americans much preferred figurative art. It was during this time she developed the pointillist technique that remained the signature style of her work during her career; dense, irregular patterns painted on large canvases in oils and acrylics that have been described as reminiscent of Byzantine mosaic patterns. 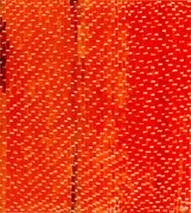 Orion by Alma Woodsey Thomas, 1973, oil on canvas, 53 3/4 x 64", Gift of Wallace and Wilhelmina Holladay, Collection of National Museum of Women in the Arts.

The NMWA description of Orion points out, "...what makes this work exciting is the unpainted white spaces still visible between the dabs of color. This creates a pulsating, shimmering and ever-changing visual rhythm all across the composition - comparable, as Thomas said, to the streaks of color one might see while riding in a fast-moving train or airplane." 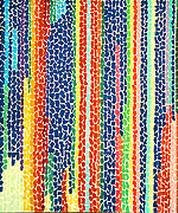 Broader recognition for Alma's paintings came later in life, according to a January 2002 Art in America article by Joe Fyfe. He writes, "Thomas's late work...consists of some 50 paintings done between 1972 and 1978, the year the artist died. During this time, Thomas was in her 80s and suffering from arthritis. Like the paintings that Renoir, another arthritis sufferer, did in his old age, her work of the 1970s is filled with an almost adamant joie de vivre. Renoir, we are told, had his brushes tied to his hands. Thomas would rest her large, lightweight canvases on two tables, then wedge herself between them so she wouldn't fall over while she worked."

Alma had her first one woman show at age 68 and perfected what was considered her signature style in her seventies. She went on to have retrospectives at the Corcoran Gallery of Art and the National Museum of American Art, both in Washington, D.C. She was the first African American woman to have a solo show at the Whitney Museum of American Art and she exhibited her paintings at the White House on three occasions.

The changing colors and shifting patterns of light on the flowers in her garden through the windows of her home became a great source of inspiration for her paintings.

The artist's unfailing optimism comes through in the biographical descriptions I've found about her. She lived in a poor area of D.C, where she gave free art lessons to the neighborhood children even when she was nearly incapacitated by arthritis. She said that her paintings show that people can be "living in the heart of the ghetto and seeing beauty." In her 80's, she continued to paint even with a heart ailment and a broken hip.

When I think of the words "indomitable spirit", I am reminded by women artists like Alma Woodsey Thomas. I envision her joy in her process, in translating the world that she saw in her everyday surroundings into vivid interplays of light and color. One source writes how she always wore brightly colored clothes. The picture above, although black and white, certainly indicates this artist dressed as vibrantly as she painted and lived.

I hope that I can continue to create with joy and optimism for many decades to come. Role models like Alma Woodsey Thomas inspire me. She attended college in a time when many women, particularly black women, did not. She found a way to support herself that allowed her to continue to explore and develop her abilities as an artist. She followed her passion as a painter even when her community and supporters did not understand or appreciate her choice to paint abstractly. She did not allow age or physical infirmity to contain or limit the passion and joy that she expressed in her work.

In an age when we are eager to find positive role models, celebrating lives like Alma's can inspire us to create no matter what limitations we may experience. When we do what we love, we find joy and inspiration.
Posted by Jeanne Raffer Beck at 2:50 PM