After writing and editing feverishly for the past few days, all the materials for my exhibition are now safely in the hands of U.of R's excellent gallery manager, Heather Layton, who said she's sending the word files and images on to the PR department. Whew.

That meant I could get back to my studio and start fleshing out ideas and then printing the fabric to make them. 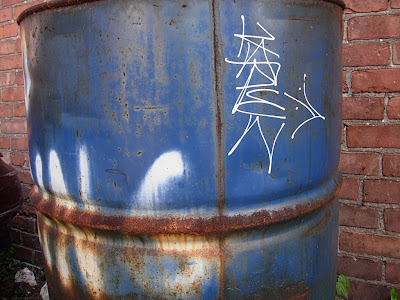 But who can start a day without an unexpected bit of fun and inspiration?? I just had to photograph this "No Parking" barrel -- loved the color contrast between the blue and the brick, the rust patterns and of course the graffiti! 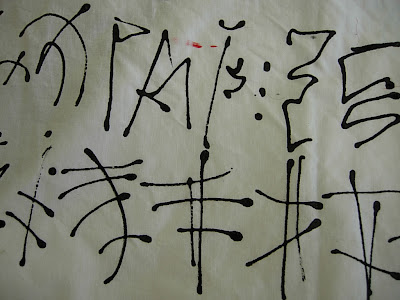 Next, while I was thinking about my ideas for the next Pages piece, I played with making a variety of letterforms with a gold tipped applicator bottle... 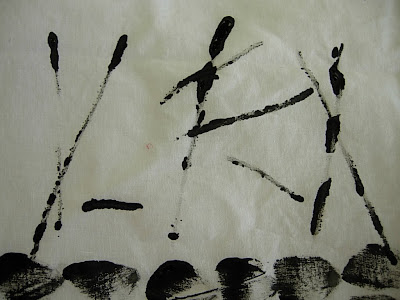 and while I was at it, also grabbed a chopstick that I use as a stirring stick and decided to see how that worked as a writing instrument! The marks along the bottom are from a brush, also fun to do. 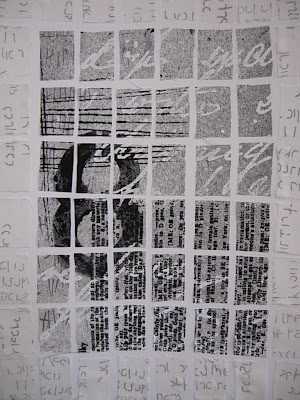 Next on the list was to try out some of the ideas rolling around in my head for some more Pages pieces. One thought is to make the centers dark and the outside areas around them lighter. Another is to create small collages for each of the Pages in a long hanging, cut each one apart and keep each composition intact -- you can especially see this happening about with the number 8. 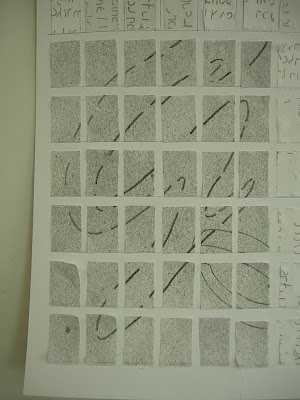 The idea behind this one is to work with one darker line on all light fabrics to create a feeling of the letter form disintegrating. I printed this with just the partial outline of a letter form. This idea needs more work.
One new way of doing samples that is working super well is to do paste-ups of these block ideas on Bristol paper rather than backing them on Solvy and stitching and dissolving them to see the results. I know what they look like stitched, gluing them onto paper and then pinning them up really helps me stand back and compare results. I can even pull the little pieces of fabric off again and paste up other ones -- a definite time saver.
If you're interested in reading the final statement I sent to U. of R for my exhibition, read on. La la la la la, it feels so good to have this DONE!!
“Notations”
Art & Music Gallery
Rush Rhees Library
May 21st – June 13th, 2008
Opening Reception: Wednesday, May 21st, 5-7 PM

“Notations” is an exhibition of new work by Jeanne Raffer Beck that charts the territory of written language and its perceived meanings. Beck combines invented letter forms with found remnants of handwritten correspondence and old printed texts; the works invite the viewer to travel the surface as one might browse through pages in a book or run a finger over a map.

A lifelong wordsmith, I combine fragments of found letters, diaries and journals from the late 19th and early 20th centuries with invented letter forms inspired by ancient texts. This juxtaposition invites a consideration of human cultures over time. Like an archeological site, these fragments can be excavated but do not always fit together; some questions about the past remain forever hidden or undecipherable. Other aspects of human experience invite the creation of a new language to understand them, one that is intuitive rather than linear.

After spending well over two decades as a professional writer, these past twelve years working as a visual artist have given me new perspectives on words and text. Discovering old, handwritten letters and diaries holds a strong personal connection as well; journaling has been a longstanding practice for me. Old diaries and journals differ greatly in vocabulary and structure from contemporary writing, even though they were written over the past 150 years. Yet it is the calligraphic form of these writers’ penmanship that fascinates me more than the content. Even the existence of such documents seems poignant, since handwritten correspondence has virtually disappeared from contemporary culture.

In addition to searching for handwritten works, ancient scripts and Asian calligraphy have also inspired my appreciation for the visual nature of written words. Language evolves and alters; each alphabet represents an entire culture and epoch. Even when these ancient scripts cannot be translated, the beauty and mystery contained in the patterns and forms still engage the imagination.

Some of the pieces in the “Notations” exhibition have map-like elements suggesting exploration or charting the boundaries of a territory. Others respond to the conceptual idea of pages – words, ideas and stories contained within books. When we speak a language, the cadence and intonations of the human voice convey as much meaning as the words. Responding to that idea, the writings on these surfaces evoke spoken sounds through the rhythm, spacing and pressure of the marks.

Each piece in this series in some way deconstructs the linear structure of text and incorporates invented letterforms that become their own visual language. Working through the ideas for each piece excavates new associations for the next – an evolution, which like language, is everchanging in the contexts of human culture and personal experience.
Posted by Jeanne Raffer Beck at 4:26 PM