Goodbye Hollywood, I'm Back in the Art Biz! 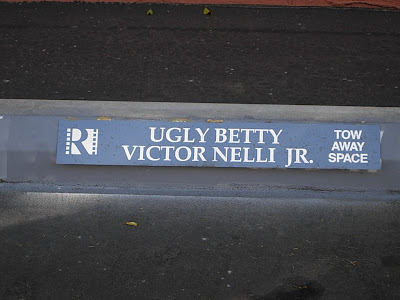 This is about as close as I came to rubbing elbows with Hollywood stars during my week in southern California! While my daughter's film festival took place at the same studio where Ugly Betty, The Closer and Private Practice are filmed, none of the casts and crews were there -- oh well --they were filming at nearby Paramount Studios the whole week -- but I did nab this close up of an Ugly Betty designated parking space, which actually belongs to a man listed on the web as the director for the television show, The Office. Fight those feelings of envy!

I spent yesterday unpacking and resettling back into my quiet upstate New York life after a week on Southern California freeways. The film festival was great fun although we worked hard -- no time to take many photos, since my niece and I took care of the food and bar for four days -- and when the festival was busy, WE were busy! Attendance is growing and I expect it will do so again next year.
By yesterday afternoon, I had settled back in at home enough to start cutting new letters out to return to -- and hopefully conquer! -- Parables 3. Before my trip you may recall that I had added the black, shadowy letter shapes. I decided the piece needed some contrast and thought some contrasting red letters might add a bit of punch. I think they're just what it needs. I'm at a point with this where all I will do for the next few days is sporadically edit the placement of these red letters as I'm working on the other two pieces in progress. Once it's totally pleasing to my eye, I'll sandwich it and start stitching. 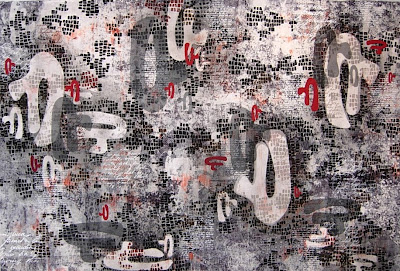 I like the addition of the red; it's in keeping with the other two pieces I did and heightens the sense of depth on the surface. I might enlarge a few more red letters now that I'm looking at this -- but this one is improving, hallelujiah.
Posted by Jeanne Raffer Beck at 12:47 PM