Yes, it will be quiet again for the next week in my studios. I'll be heading off tomorrow for San Diego and Los Angeles until April 8th. More about that in a minute! I wanted to leave on a positive note rather than feeling frustrated, so I worked as much as I could yesterday and today to address what I didn't like about the two current Parables pieces -- and I am greatly encouraged. Even though neither piece is finished, I think I know exactly what to do to resolve them once I'm home again.
In the previous Parables piece, I layered sheer red letter forms over the surface. I started that process again with this piece, only with large black sheer letters. I've cut out, added, subtracted, arranged and rearranged large and small sheer black letters most all day today and yesterday. I've done my usual extremes-- too many elements, too few elements -- and it's going to take some additional work to resolve the piece to my satisfaction, but with the added shadowy black shapes, I feel like the work has much more depth and visual interest. This is an "in process" image below of just one of the many variations I've tried, and it isn't the final version, but it does let you see where I'm going with the additional layer. Definitely an improvement. 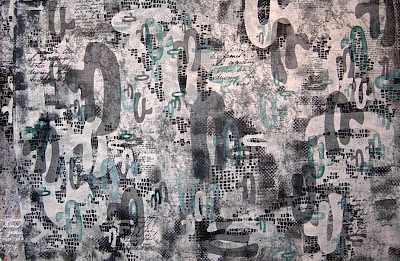 Feeling like I had a winning streak going, I shifted my attention to reclaiming some of the white space I had lost on the other Parables piece when I got too heavy-handed with the silk screening of the dark red and brown accents on the white letters. I decided to test out the idea of layering sheer white fabric shapes over some of the letters. Below is another rough, in-process sample of what the idea looks like, but I feel VERY positive about tracing the exact shapes and layering white sheers over the letters when I return. It's quite interesting to lighten the shapes again but also see the toned down patterns behind them. Returns the value contrast to the surface that I had lost. 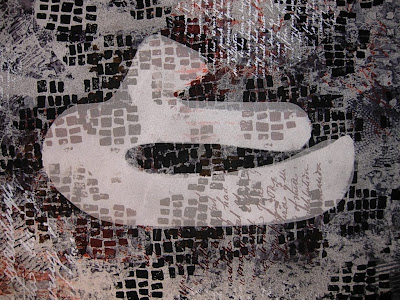 Am I happy? You bet! I also know how to resolve the third Pages piece. I tried several ideas on my list and the one that works best is to fuse new letter forms over the previous ones. There are pins and patterns and bits of sheers spread out wall to wall in my sewing room as a testament to my hard work and persistence! Here's a shot of the piece with three of the larger letters covered with white sheers in approximately the same shapes. Yep, it definitely looks much better. 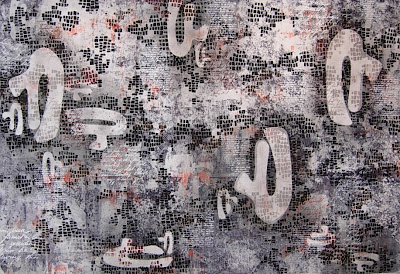 I'm looking forward to a wonderful time in LA. My daughter's film festival is in its second year and I've signed on to help with everything from collecting tickets to serving as a bartender. I'm delighted to be going -- I love independent films -- and this lineup looks like an interesting one.

Check out http://www.brilliantlightfest.com/ and you'll be able to see trailers of many of the films. If I don't get a chance to blog, it's because we're too busy with the festival, but I'll try and get pictures up of some of the highlights. Meanwhile, I'm leaving with a feeling that all is well and moving forward with my work and I can come home and complete these pieces and get moving on the next ones!
Posted by Jeanne Raffer Beck at 2:41 PM