Lest you think the artistic life lacks cliff-hanging adventure, consider the Tale of the New Seed Pieces. One post ago I showed you three new black on white pieces that I had just printed. All I needed to do was steam and wash them; once that was done, I could continue developing the "seeds of compassion" theme. When I started rinsing out the fabrics, however, I noticed an unusual amount of black dye rinsing out of the fabric and settling into the white background. I washed and rinsed repeatedly, but soon had to accept that somehow some remaining black dye had managed to migrate and bond with the white areas of the silk. So now I had black cocoon shapes on a gray ground instead of a white one. I even consulted with my dye expert and friend Vicki Jensen at Pro Chem, reviewed every step of my process with the pieces and hoped she had a magic solution -- or at least an explanation. She did not. The white was gone, the gray there to stay.

"They're ruined," I announced to Paloma and Dawn at my drawing class on Friday afternoon, "So I'll just use them for experimentation." They both thought otherwise, suggesting that I could find a way to address this unexpected alteration in the cloth and make it work. 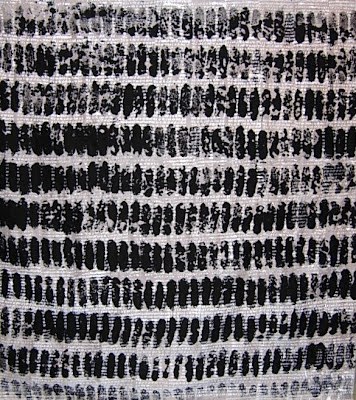 Bless the presence of fellow artist friends and their supportive voices. My brain started chewing on the problem and by 3:30 AM I woke up with an enticing idea. I had to coax myself to relax and stay in bed until 5:30. Then I quickly dressed, drove up to my studio and leaped into action. Feeling almost possessed by the need to see how my idea would look on the surface, I masked off all the black cocoon shapes one by one and then silkscreened one of the invented texts around them in white. The idea worked out as well as I had hoped; the contrasts are exciting. 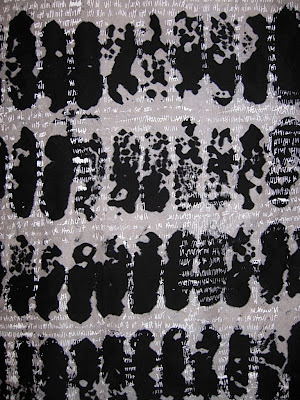 I had been concerned about the new pieces being so similar to the first one that they'd look like repetitions rather than a progression. It appears that the Muses stepped in with their own ideas about variations on my theme --and handed me a well-disguised gift. I had wanted to add white hand stitches to accent the cocoon shapes on the first "Seeds of Compassion" but they disappeared against so much white on the surface. Now the white text POPS against the gray behind it -- and so will the white machine and hand stitching that I'll add next. It will allow me to really develop those small seed shapes within the larger ovals before I add small touches of color. So this new piece, while still pursuing the same theme and ideas and maintaining a strong visual connection, will do so in an unique and different way from the first one!
Lest you think I made a simple dyeing or processing mistake, let me add that on Friday after the drawing class ended I monoprinted another piece of silk with the very same dye. On Saturday morning I steamed, rinsed and washed it exactly the way I did these and there was almost NO washout and NO bleeding or staining of the white areas. A forever unsolved mystery, but one that opens up new ideas and directions. My favorite part about engaging in making art -- it challenges me to think out of the box time after time.
Posted by Jeanne Raffer Beck at 4:09 AM