It's Not Dead After All!

Set 'er loose, let 'er go. That's what I did with the new language piece that seemed to be faltering and sinking no matter what idea I tried. Finally I had enough and felt willing to move on, turn the page, pull the plug. Done, finished, out the door. Once I did that, I released all the worry and anxiety connected with it, which allowed me to play and turn my gaze in a new direction. 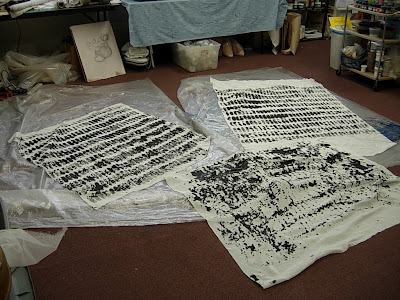 I spent the day Tuesday at my studio relaxing, reading, and pulling some new prints to explore variations for possible new "Seeds of Compassion" pieces. One of the delights in monoprinting is how you can vary the textures and patterns on the surface before you print. 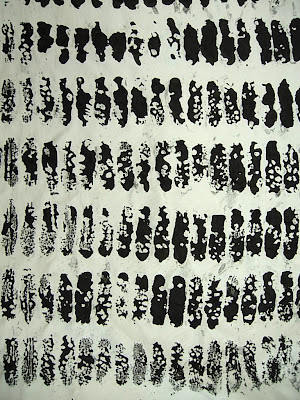 I actually can see seed shapes inside the small cocoons in these new pieces and those provide the progression that makes working in a series so fascinating. Each new work maintains the original idea but approaches it with a slight variation -- and that small step provides a contrast that is both interesting for a viewer to to look at and intriguing for the maker to develop.

Between the small painted studies and these prints, I've returned to thoroughly enjoying explorations on my language theme-- and of course you're guessing what comes next. New ideas began to creep in for the work I had given up on in frustration -- and it has not been all that long since I put the last shovelful of dirt on the grave. Happily an e-mail from my good friend Rosemary also gently suggested that the piece had merit and didn't deserve a burial yet. 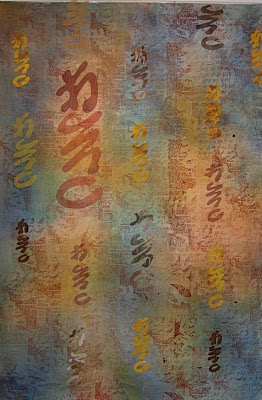 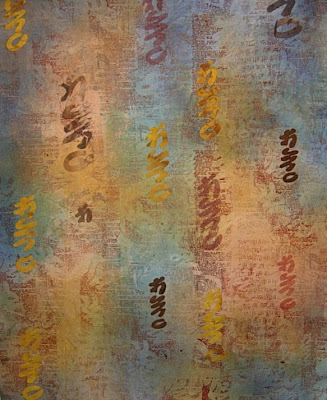 Here are two earlier versions of this piece. The first insight I had once I came back to it with a fresh perspective was that in both versions, running the letterforms all in straight rows didn't create any movement on the surface. The piece was static. So I started skewing the letterforms. After doing this, I liked them better, so then I decided to try alternating large and small letterforms within the same units. I noticed that this choice gave the piece a lot of more depth and movement, not the type of scrolling illusion I was originally aiming for, but a lot more visual interest that moves the eye around the picture plane. 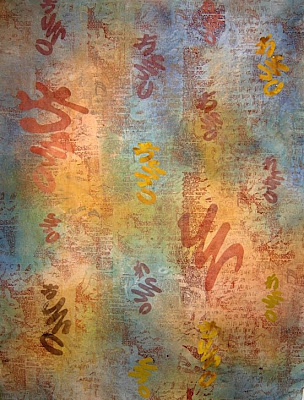 While I liked the contrast of the dark brown letterforms on the earlier pieces, they were very domineering, drew my eye and kept it stuck there. So I removed all but one softer brown on the lower left of this version. Then I started varying the scale of the letterforms within each of the little groupings; they really start to appear to be falling into the picture plane in some areas, creating a nice sense of dimension. Some of the groupings don't have three letterforms in them either, which also provides contrast and more interest. 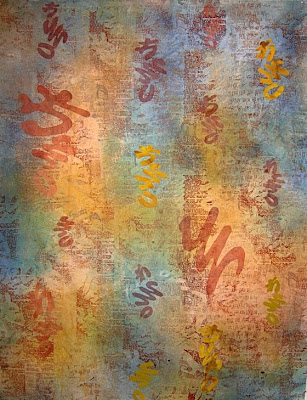 The last thing I did before I called it a day was to remove the dark brown on the lower left and try a rust color in this area. This piece is coming alive, becoming more and more interesting as I play with subtle shifts and changes to emphasize letterforms in one area or make them almost blend into another. I imagine that stitching will add another layer of detail, texture and contrast.
I'll continue to fine tune this piece -- without pushing, without trying to force it to resolve on any particular time frame that I might impose on it. But don't you agree that it's certainly risen from the dead??? In the meantime, I'll head back up to my studio today to steam and wash out these three new pieces and do another small painting.
Posted by Jeanne Raffer Beck at 3:48 AM