Now, granted, I don't follow or practice astrology but that doesn't mean I don't acknowledge that the interactions of the stars and planets have an impact on me. So when I received a newsletter from Carolyn Myss this morning written by astrologist Richard Ohotto explaining that Mercury is in retrograde and what that actually means, I found it quite interesting in view of all the flukey mishaps my studio work has been plagued with for the past four to six weeks.

I've felt a bit like a penguin trying to fly. Or a squawky chicken trying to soar like an eagle. Misreading directions, frequent lapses in memory, focus and concentration and very drawn into myself. A serious case of the "RE's":

Obviously these are exceptionally valuable practices and normally I would welcome them. But my fantasy was that I'd be a high-kicking, leaping artistic NINJA these past two months. Surprise, instead of feeling sharp and focused and productive and high energy, I've felt very inward and contemplative and almost deer-in-the-headlights dazed.

Yesterday, when two more pieces of steamed, dyed cloth didn't work out AGAIN, I just gave into the RE's. Restoring order. I've cleaned the studio and moved my computer to a quiet, cooler area away from the glaring morning sun. I've washed out containers and mixed new dyes, washed all the dye rags and steaming sheets and folded and put them away. 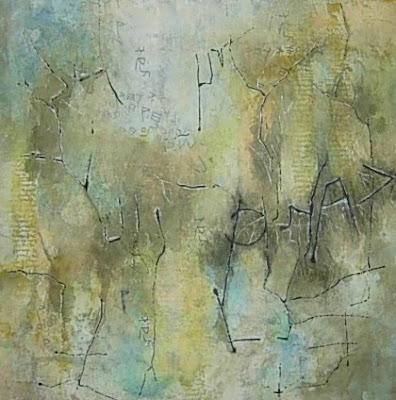 I'm also Revisiting processes and Revising my efforts. I put another layer on the small lutrador composition and now will add some stitched details before framing it that will vary the weight of the lines. While it's a lovely piece, it drew my attention to expanding my vocabulary for painting cracks and fissures. On this piece as well as my previous one, the cracks have been somewhat uniform in weight. The real cracks that I adore on the cement floors all over my building are definitely more irregular, with wide and narrow areas. 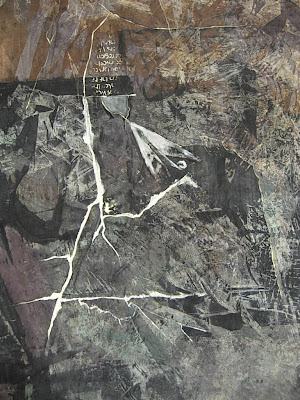 In my now wonderfully clean and uncluttered space, I've quietly been using this silk sample to explore painting cracks by working with opaque paints on a dark surface. There are three thicknesses of pigment on this surface. I'm slowly, quietly testing out laying down lines with thick paints and thinned ones. It's small, quiet work that doesn't require me to compose surfaces or contemplate layers of meaning and the relationship of design elements.

I'm noticing that laying on a thick line right from the beginning feels much denser and less appealing than building up successive layers using thinned paint. The small rectangular shape on the sample above is thinned opaque paint. Thinning with water makes it semi-transparent. The shape below it, the larger triangle shape, is a bit less diluted.

A simple endeavor. It's what I feel I can handle at present!

So, if you too have felt a bit "off" this past month or so, and are open to the idea that your life could be influenced by the movements of the planets, then take heart. According to Mr. Ohotto, this inward, slightly unbalancing (my word for it, not his!) period of time when Mercury appears to be traversing backwards instead of forward will end on September 29.

And then, perhaps, my inner Ninja Artist may surface!
Posted by Jeanne Raffer Beck at 12:10 PM