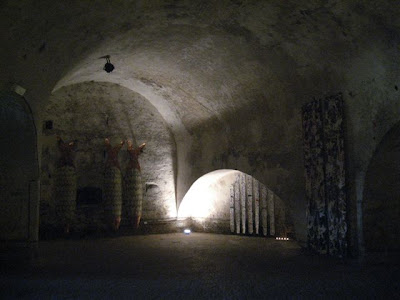 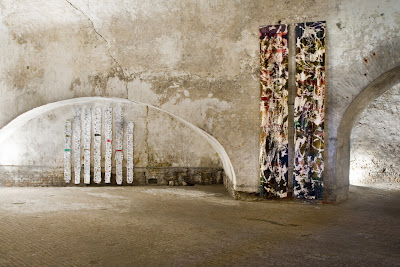 What a busy week! After I got the AQ article out, I started working on another one that's due this month for Surface Design Journal. Els van Baarle ---http://www.elsvanbaarle.com/ -- an amazing Dutch artist who teaches batik in the U.S., e-mailed me an image well over a year and a half ago from a 2005 exhibition she had with several other artists in Fort Rammekens, a Dutch fort on the western coast of the Netherlands that was built almost 500 years ago. I felt an immediate emotional connection with the space. When I found out Els and three other wonderful Dutch artists -- Cora de Kok, Jose van de Valk and Cherilyn Martin -- were planning to mount a second exhibition there in September 2007 titled"Remains," I contacted SDJ and proposed writing about the exhibition; the site and work there intrigued me so much that I felt other artists would respond to it as well.

We started working on the article a year ago. Writing back and forth was a challenge -- English is not the native language of three out of the four and I don't speak a word of Dutch, so I am sure it must have been very frustrating for them to try and explain their processes and inspirations and artistic histories in a foreign language. Then Els' husband Dirk fell ill unexpectedly and died a short time later. Of course we stopped working on the article. Els cancelled all her other obligations, but felt it was important to stay in the exhibition.
By the time Els was ready to work on the article again, I was devastated by the death of my mother in late August and the horrific accident that killed my sister and brother that same day. As the months went by, I cancelled other obligations, but somehow felt I couldn't cancel writing the article.
As January started winding down, I knew it was now or never, so I started working on it and shifted into high gear this week so I can have the completed article in the editor's hands by February 15th. It's been interesting to send e-mails back and forth with each of the four artists exhibiting together in the fort, to research the fort's history and to receive the images of the final works in the exhibition.
I'm not working on it today only because I'm teaching a textile painting class tomorrow at the Memorial Art Gallery in Rochester and have to pack, load and haul supplies from my studio into the museum. Luckily I can unload everything there later this afternoon rather than do it tomorrow morning right while everyone is arriving for class. I'm looking forward to a wonderful group and class and will post about it over the weekend.
After the class is done, it'll be back to writing for me, fine tuning and editing the article so I can send it off. My reward -- which I'm very eager to get -- will be some time in my studio working on the cloth for the next new piece.
Posted by Jeanne Raffer Beck at 6:11 AM