Sorting the Wheat from the Chaff

I am always intrigued by my own responses to beginning a new creative endeavor. First there's the anticipation and excitement in starting a new project. I almost always dive in like it's New Year's Eve and the crowd is shouting the countdown on Times Square as the ball slowly drops down -- lots of cheering and kissing for sure. Then it's 12:03 AM, the hoopla quiets down and I settle into This Is Sure A Lot of Tedious Work stage. Can a person cut out a gazillion tiny rectangles and glue them down in precise configurations without scratching their heads once in a while?? 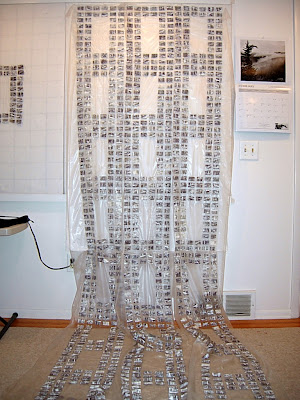 The first layer of glueing the small rectangles on the water soluble is done and I can easily edit it at this point before I proceed. This is supposed to hang on a high ceiling and my board only goes up six feet, so use your imagination to see this hanging properly!

Now that the first layer is on, I can move on to the R & D phase -- finding out which of my original ideas for this piece work and which ones don't, then either ruling them out or tinkering with them until they do. I've tried and vetoed about five or six variations for this piece already. I wanted to explore the idea of leaving open sections of this new piece with threads sewn in just one direction so I could weave scraps of contrasting sheers in and through the spaces, then stitch over them again in the other direction. Here's the first sample. 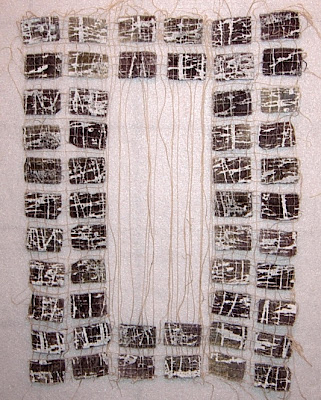 This much open space will distort how the piece hangs. You can see the distortion already here. To show you where I'm heading with this, imagine the red shapes on the piece below aren't just scraps, but elegant language forms. I want to incorporate those on the surface, both behind and in front of the rectangles, and weave them in and through the threads in the open space at the center. I may try laying down the shapes in the open center first and then stitch over them both vertically and horizontally rather than weave them in. I can place red sheers in front of and behind the grey rectangles in other areas. 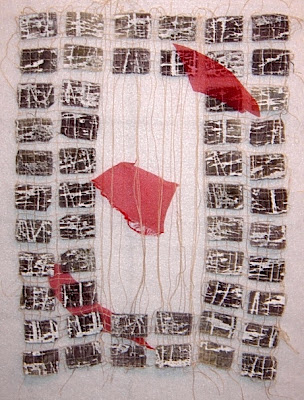 I honestly enjoy this sampling process so much that I don't mind it when some ideas don't work out. It is so fascinating to work through the ideas, address the problems and come up with innovative solutions that I do think this is my favorite part of working with a new idea. Once I hammer out the bumps and wrinkles, I'll know if the idea -- and my execution -- succeeds in capturing the original inspiration. I really am an explorer -- I like the journey way more than the destination and there is always another new port on the horizon.
Posted by Jeanne Raffer Beck at 5:05 AM