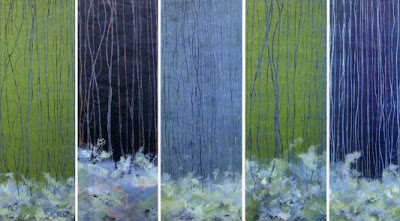 The first and second days of my time with Christine have flown by. Here is an example of the water imagery she is currently working with. These 27.5" x 9.75" pieces are from her "Falling" series; they are monotypes, waxed and mounted on cradled panels. 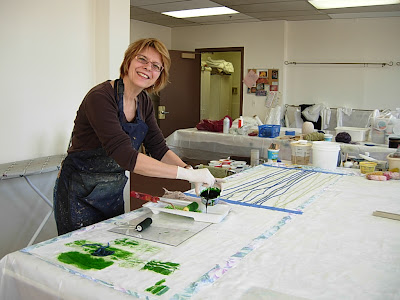 Christine creates her monotypes in her own New Hampshire studio by layering a variety of thicknesses of yarns, wires and strings on her printing plate. When she runs the paper and inked plate through her press, the yarns create resist patterns on the paper. With each layer she alters the arrangement of the yarns, building patterns and texture. But since the oil-based inks she uses are fairly opaque, each layer covers the color beneath it except for where the resists are.

Not true with dyes. They are transparent; each layer interacts with the colors beneath it. And without a press or plate, there is nothing to hold the yarns and string in place while applying the dyes. We talked through a variety of options and tried numerous ideas for applying color and texture to the fabric while preserving the yarn resists. 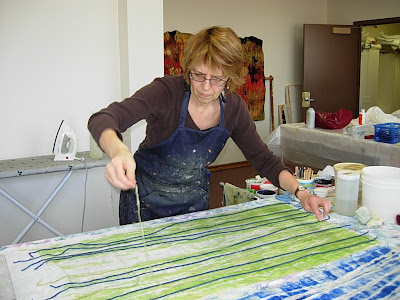 Here is Christine laying down a variety of threads before applying a second layer of dye to one of her first sample pieces. We tried many methods of creating textural patterns on the surfaces with brayers and foam rollers and brushes. We wrapped thread around foam rollers and rolled those on to the cloth to create fine lines. We monoprinted clean fabric onto printed fabric before removing the yarns for interesting reverse prints -- that was hugely promising! We experimented with applying lines with chemical resists through a fine tipped squeeze bottle.
The idea Christine felt most drawn to was to sandwich the composed yarn and string designs between two layers of silk. First we attached a layer of silk to the print table and composed the threads on their surface. Then we stretched another piece of habotai silk tautly on top and taped it down. Once the two layers were secure, we rolled dyes over the top layer. Victory! -- the threads stayed exactly where we had placed them. Each side prints differently, a reverse of the other. 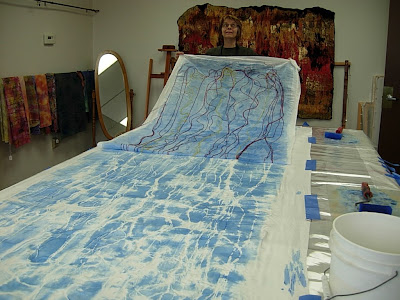 Here is Christine lifting off the top layer and revealing the fabric underneath. On the bottom layer, the yarn creates white resist lines. The colored yarns shown here sticking to the surface of the top fabric will be peeled away. On the top layer the yarn lines appear as a positive image; they are darker blue with lighter blue areas around them (similar to doing a rubbing). 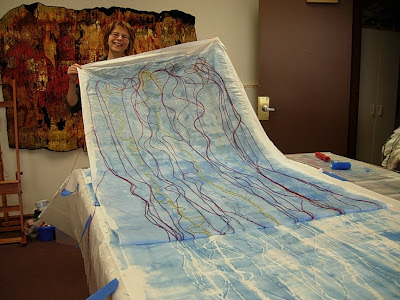 Christine was delighted with the results. Before we left the studio today she arranged new yarns over this light blue and white surface, placed the other piece of silk back on top and rolled another layer of blue, this time a pale grey-lavender tone. We'll find out tomorrow morning how successful that layer is but what we did see when we peeked under the top layer looked promising.
Posted by Jeanne Raffer Beck at 4:39 PM