My Radar Screen Lights Up! 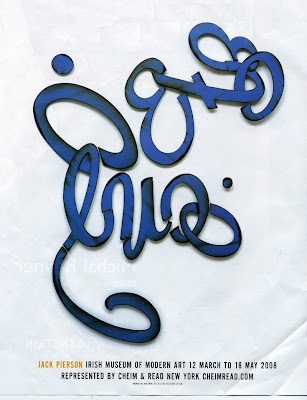 I picked up a neglected issue of Art in America yesterday that has been sitting unread on the coffee table for several months and immediately opened to an ad featuring a piece by Jack Pierson -- and I confess, I have never heard of him. But isn't it interesting that just after jotting an idea down in my sketchbook that involved deconstructing written text and reassembling it into new compositions, that a full page image suddenly appeared of a metal sculpture of that very idea -- "Abstract #3", 2007, 70 x 94 x 2 in. -- right smack dab on the center of my radar screen??

Remember the picture from the other day of piles of letter shapes covering the surfaces of my sewing studio and laying in random groups on the floor? I thought, as I looked at them, how cool it would be to experiment with creating a new piece just by throwing cut out letters up into the air like leaves and letting them fall onto a piece of fabric below to create a totally random composition. 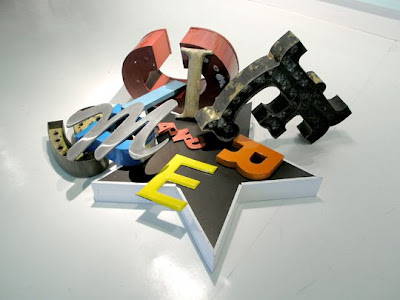 This salvaged-sign-letter sculpture by Pierson called "Music and Fire,", 2006, looks like the pieces just fell randomly onto the surface beneath. Of course we all know just how much work goes into crafting a seemingly spontaneous assembly of individual elements into a cohesive whole, but the fact that I happened upon it almost as soon as the thought entered my own mind
is one of those delightful coincidences that I love. 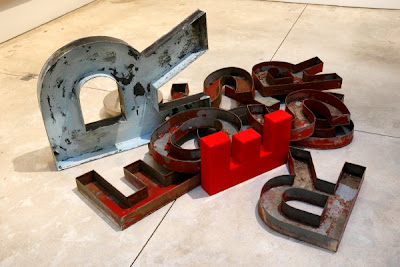 Here's one last one, called -- what else? -- Roses, Roses, Roses -- a kind of tongue twister version of its own name. I also discovered in reading about this man's diverse body of work that for one exhibition (couldn't find images) he did seven small pencil drawings where he meticulously copied the first pages of books by women. Two of the books he copied were Barbara Pym's "Less than Angels" (1955) and Sister Wendy Beckett's "The Gaze of Love" (1993).

I will have to visit the library and see what more I can find out about this artist who obviously finds letterforms as intriguing as I do. When I happen onto someone who uses letters and words in their work, I want to learn more about their work and why they choose these elements to express ideas.