Casting Out Lines, Hoping for a Bite

I opted to stay home rather than go to my studio yesterday; I felt drawn to explore ideas for new Pages pieces and I've learned to respect those inner nudges. In a matter of minutes, I was grabbing and cutting whatever fabrics still remained from previous dyeing and printing sessions, fully absorbed. While the choices in the remaining fabrics are more limited, there are enough for experimentation.

There's such a strong visual aspect to my process that even though I plan and visualize ideas in my mind and often record them, I can't really respond or evaluate how they're working until I actually see the pieces in front of me. The results are usually very different from the images in my head and somehow that always fascinates me, no matter how many times it happens. The new ideas all seem so perfectly planned, but the implementation never fails to deliver twists and turns. But that's exactly what makes art making so engaging, because it IS so unpredictable.

The first idea in my head had to do with combining different scale rectangles together, so I cut some 2.5" x 3.5" pieces to interplay with the 1" x 1.5" pieces. 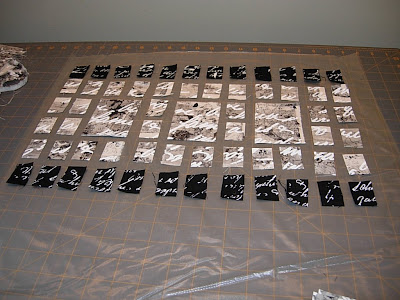 I considered ways of combining the larger rectangles with the smaller ones. I tried multiple combinations of values and patterns, but the silkscreened fabric here with diary excerpts screened over it in white has a photographic quality that appealed to me more than any of the other fabrics I tried with it. Of course there's not enough of this to do an entire piece, but now I know what specific yardage I need to create to continue with this idea. 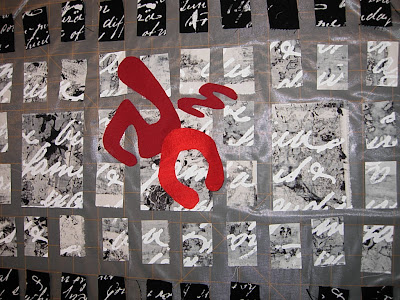 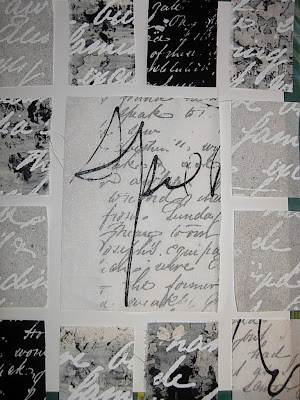 Another idea followed; this one based on the abstract calligraphy I've been exploring. This sample came together more easily and I like its potential. Tomorrow I'll paint more abstract calligraphy on subtly silkscreened fabric and then cut that apart into rectangles like this one. Smaller size rectangles will be composed around these according to value -- this would allow me to use up many odds and ends of fabrics and also create more random movement because of the value shifts. The eye pushes some back and others move forward, giving it more of a feeling of light and shadow. Plus, if I keep the original arrangement of the larger rectangles once the fabric is cut, the shapes and lines may appear more continuous, perhaps as if they are going behind the surrounding rectangles and then reappearing. More to find out with this.

Another idea that I tested the waters with yesterday was the idea of cutting through cloth and creating negative spaces in the shapes of invented letters. Please ignore the shapes below and fabric combinations and just focus on the idea, I just grabbed several patterns that were closest (laying on the floor actually!) and started cutting. The white against black is a bit too much contrast for my eye, but trying this out led me to an idea that I hope to get time to try out today with undyed organza. I promise I'll select more aesthetically pleasing shapes for that one! Once I cut out the black piece, I wondered if positive shapes could be combined and laid over the surface. All I had were some leftover reds to test this out. There's just way too much contrast here, but the next sample won't be as rough. I think this idea does have promise, will continue to work on it. 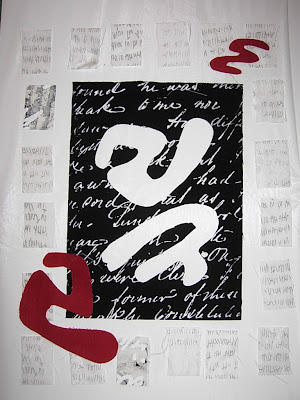 Work on this small painted and stitched piece is nearing an end. These small works allow me to indulge my love of color when I need a break from the grayscale pieces. 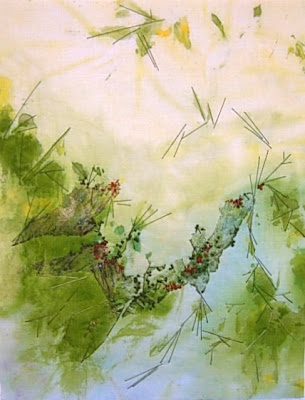 Any other additions will be minimal. I cut this one down and ordered 9" x 12" stretched canvases and frames to mount both this piece and the next one, which is complimentary but different so may try some different colored threads and stitching on it. In my mind's eye this looks like a reflection at water's edge. 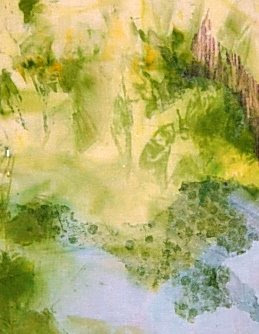 Once mounted, these will both be for sale. Ill post the completed versions in their frames with prices and if anyone is interested in purchasing one or both of them, just let me know.

Posted by Jeanne Raffer Beck at 6:40 AM