I'm continuing to investigate and consider various types of imagery before embarking again on new work. Gathering and reflecting on ideas and building an idea pile may seem overwhelming at first, but inevitably one stands out from the rest and commands attention. Suddenly an inner shot is fired, the gates swing open and the adrenalin pumps -- I can almost hear the announcer's words "And they're off!" -- and feel the rush of energy that comes with a new beginning.

Voyaging out in the community to photograph graffiti is part of building that idea pile. It allows me to see text and language in novel and interesting contexts. Some artists choose to conceal the meaning of their lettering. Even though I can't "read" the writing below, the fact that it is repeated almost identically line after line leads me to believe that the artist is indeed concealing a "message." The last line may contain a signature -- the exclamation points are interesting as well. The commercial signs below with their terse communications are a fascinating contrast to the sprawling, space-consuming letter forms above that fill the glass window. 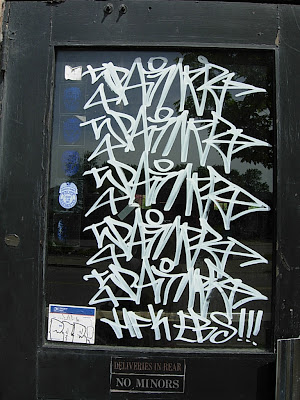 Contrast that type of graffiti writing with this one, where the artist definitely wants the viewer to read the message and is less concerned with the artistic merit of how the message is created. 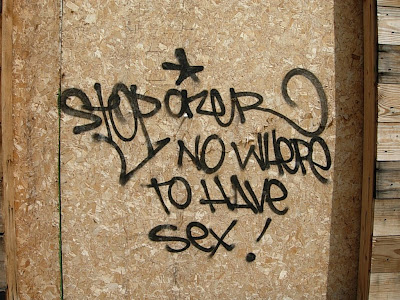 One of the questions I'm posing to myself as I pursue my exploration of language imagery is whether writing the language in a way that it can be read is important to the meaning of the work or whether it is the shapes and arrangement of letter forms that most intrigue me. I don't mean this to be an either or question -- there's a continuum between abstraction and readability that I want to travel, but for me, the most fascinating calligraphy and texts are those which are partial, incomplete or abstracted in a way that I can't decipher the full meaning. 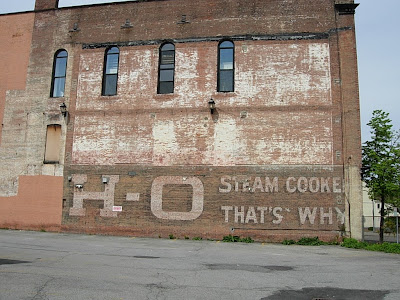 Even this building, with its worn away sign, hints at advertising something but certainly doesn't explain what. Doesn't it intrigue your imagination even more to read just a portion of the original sign? Doesn't it seem to have more to say about its culture and surroundings because it is worn away, neglected and its original message indecipherable? The partial message suggests the passage of time and cultural change, subjects which could also inform my own work, since I often wonder what the next evolution will be in language, particularly with the new "text message" language that is evolving.
Posted by Jeanne Raffer Beck at 6:41 AM