On Friday morning an excellent area photographer, Dan Neuberger, came and took professional shots of the "Notations" installation. These will be helpful in applying for other solo exhibition opportunities. Then yesterday morning -- how quickly the time passed-- we took the "Notations" works down. In every way it was a wonderful experience and I'm looking forward to more!

But then it was back to the current process of sifting and sorting. Where does the "finding gold" part finally arrive in this panning process? I've spent a fair amount of time now testing and sampling ideas and variations. It takes patience and self-discipline at this stage and I get tired of cutting, trying to visualize what one block will look like repeated, what ways I might vary the process and components for the next piece. There's nothing wrong with most of the ideas I've tried -- but they're more like the tiny flakes of gold that panners accumulate rather than a good-sized nugget . I keep panning and sifting though, reaching for that one piece of gold that can excite my imagination and engage my attention. 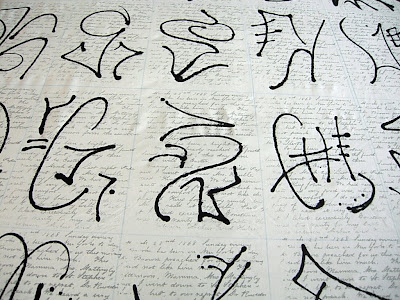 I need to keep practicing these free form drawn letterforms. Some of them work together and some of them are less visually pleasing. Part of my practice in developing future invented letter forms will be to create marks that have more unity, much like any alphabet does. Another benefit from creating this piece of fabric is that it also helped me realize that I prefer language marks that flow across the surface like writing instead of drawn inside premeasured spaces.

I did cut all these letterforms apart yesterday, though, to experiment with them. First I kept the large center rectangles intact and surrounded them with darkest values to accent the light centers and create a bit of depth. I did cut off portions of the letter forms, where possible, so not all of them stay neatly within the borders. 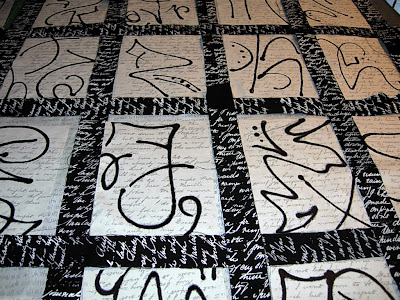 Then I wondered what would happen if I combined my tiny rectangle pieces with fabrics cut into strips...or moved from rectangles to strips of fabric oriented both vertically and horizontally on the surface. This idea has the potential to be one of the "nuggets" I've been waiting for!

So here's a piece that's been cut apart vertically and surrounded with small, dark rectangles to frame and separate the letter forms from each other. The rectangles around each piece will form a very dominant element when combined. This decreases the importance of the individual letter forms in the openings, or so I think at the moment. 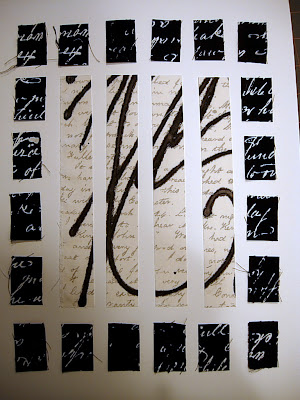 But adding any separation between the letter forms seems to help. When I combine the same strips with rectangles of similar value to the ground, the gestural marks dominate. 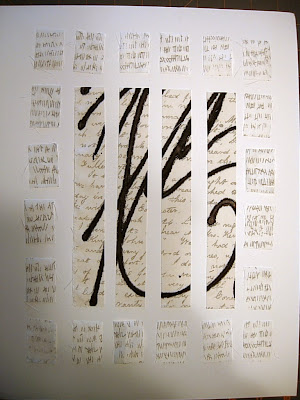 Since my goal in this series of Pages pieces is to begin to sequentially break down the strong grid, this idea of cutting strips of fabric rather than rectangles could just be that nugget I've been working towards. Cutting these vertical strips and staggering them as I lay them out could create patterns that rise and fall rather than go straight across the surface. Horizontal strips hold a host of possibilities as well, as does the idea of combining strips and rectangles without them forming any sort of repeating geometric shapes at all.
Posted by Jeanne Raffer Beck at 3:33 AM